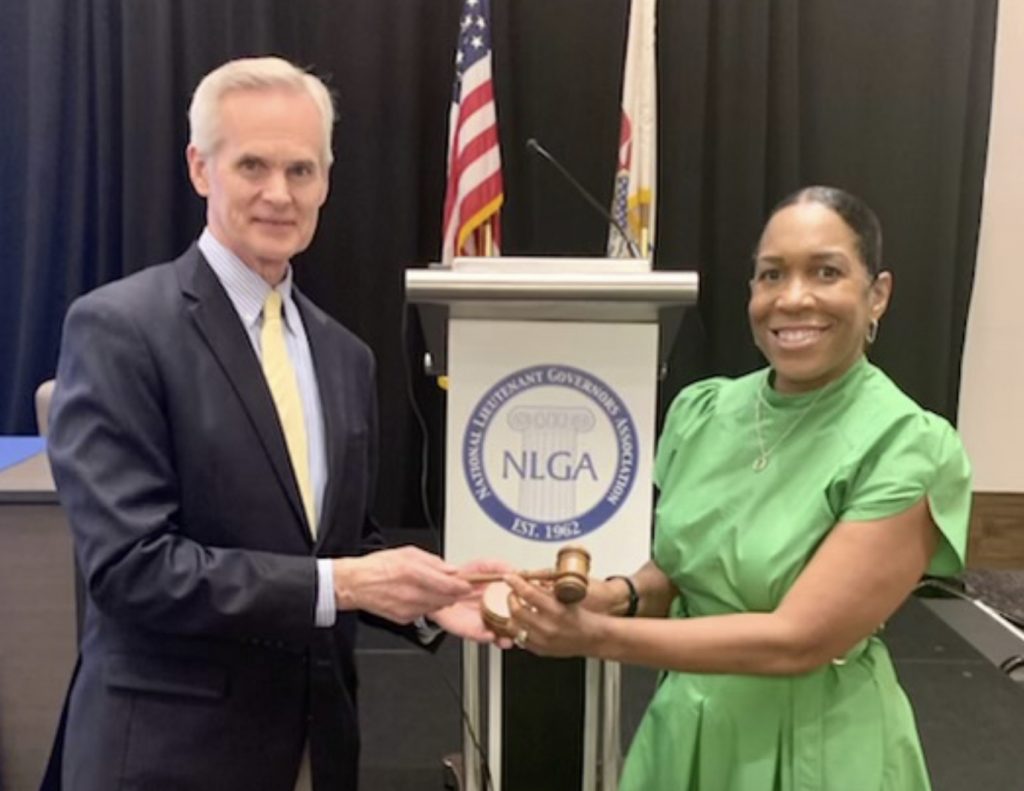 “Being lieutenant governor of Illinois means shaping policy so that communities who have long been forgotten or ignored know they are part of our democracy.”
—Lt. Governor Juliana Stratton

Chicago – As a legacy is celebrated, a new chapter is being written. Lt. Governor Juliana Stratton became chair of the National Lieutenant Governors Association (NLGA) at today’s annual meeting, making history as the first Black woman to hold this position.

This milestone comes as the NLGA commemorates 60 years of providing a meeting ground to the nation’s seconds in command in Chicago, the city where the organization was founded. Members continue to uphold the tradition started decades before of convening to listen and learn from each other and foster connections to better lead in their roles while also ringing in a new era of leadership.

“It is an honor and a privilege to contribute to the rich, 60-year history of the NLGA as the first Black woman to chair the organization,” said Lt. Governor Juliana Stratton. “I look forward to taking on this role and fulfilling my duties so that we, the proud members of the NLGA, can all serve our residents and make even greater impacts as leaders.”

Lt. Governor Stratton also made history as the first Black woman elected to a constitutional office in Illinois. She began her journey as a college student conducting voter registration drives and promoting education for all as part of a local school council. She also served in executive leadership roles for government agencies and became state representative for the 5th district. Lt. Governor Stratton stands on the shoulders of the women lawmakers who came before her to pave the way, and she builds on their legacies by committing to bridging gaps and expanding opportunities for all.

“Congratulations to my dear friend, Lieutenant Governor Stratton, on her historic appointment as chair of the NLGA. She is the kind of leader that pushes us forward—that inspires us to think of creative, equity-centered solutions for our greatest challenges,” said Illinois Governor JB Pritzker. “At every turn, the Lieutenant Governor acts with intention—building coalitions and forging connections. Just as she has done for the great state of Illinois, there is no doubt in my mind that Lieutenant Governor Stratton will bring about immeasurable progress within the NLGA.”

Lt. Governor Stratton was elected by a bi-partisan vote of her peers and service begins immediately and will run through August 2023.

She is proud to mark this momentous occasion in the hometown Lt. Governor Stratton and the NLGA both share and to continue opening doors for underrepresented voices and perspectives.

“As an active, non-partisan organization, NLGA has created a forum for seconds in command to advance opportunities for our states and our constituents,” Lt. Governor Stratton said. “It provides all state and territorial officeholders who are first in line of gubernatorial succession a professional opportunity to find effective ways to address new problems, foster cooperation between states and generally improve the effectiveness of our offices.”

The NLGA was formed in 1962 as the professional and educational association for the elected officials who are first in line of succession to the governors of the 50 states and five territorial jurisdictions of American Samoa, Guam, Northern Mariana Islands, Puerto Rico, and the U.S. Virgin Islands.

“Lt. Governor Stratton’s selection reflects the faith that her colleagues nationwide have in her ability to lead this vital group,” said NLGA Director Julia Brossart. “Her Chairship was confirmed by all members attending the Annual Meeting in Illinois.”

“Throughout my first year in office, I have looked to Juliana Stratton as a role model for what an effective lieutenant governor can accomplish,” said Rhode Island Lieutenant Governor Sabina Matos. “As the first woman of color to chair the NLGA, she will continue to inspire and empower our colleagues across the nation. I look forward to working alongside her during the 2022-2023 session.”

NLGA provides a medium for networking and exchanging essential information among officials, while providing a timely discussion of topics from agriculture and transportation to housing and health. NLGA provides specific STEM education opportunities across the states.

For more information on the NLGA, visit www.nlga.us  For more about Lt. Governor Stratton, go to her social media platforms (@LTGOVSTRATTON)